Sign in Register
What would a truly disabled-accessible city look ? | FURNTR

What would a truly disabled-accessible city look ?

Most cities are utterly unfriendly to people with disabilities – but with almost one billion estimated to be urban-dwellers by 2050, a few cities are undergoing a remarkable shift

To David Meere, a visually impaired man from Melbourne, among the various obstacles to life in cities is another that is less frequently discussed: fear.

“The fear of not being able to navigate busy, cluttered and visually oriented environments is a major barrier to participation in normal life,” says Meere, 52, “be that going to the shops, going for a walk in the park, going to work, looking for work, or simply socialising.”

That’s what makes an innovative project at the city’s Southern Cross train station so important to him. A new “beacon navigation system” sends audio cues to users via their smartphones, providing directions, flagging escalator outages and otherwise transforming what previously a “no-go” area for Meere.

“I no longer have to hope there’s a willing bystander or a capable staff member to provide direct assistance,” he says. “And on a very personal and powerful level it allows me to use this major transport hub in one of Australia’s largest cities with certainty and independence as a parent with small children. It’s a real game-changer.”

Meere is just one of the hundreds of millions of people with disabilities who live in cities around the world. By 2050, they will number an estimated 940 million people, or 15% of what will be roughly 6.25 billion total urban dwellers, lending an urgency to the UN’s declaration that poor accessibility “presents a major challenge”.

For the physically disabled, barriers can range from blocked wheelchair ramps, to buildings without lifts, to inaccessible toilets, to shops without step-free access. Meanwhile, for learning disabled people or those on the autistic spectrum, the cluttered and hectic metropolitan environment can be a sensory minefield.

Stairs, revolving doors, cobbles and steps on to trains are a few of the features that make it difficult for people in wheelchairs to access their cities

Although the Convention on the Rights of Persons with Disabilities and laws such as the Americans with Disabilities Act, Britain’s Equality Act and Australia’s Disability Discrimination Act aim to boost rights and access, the reality on the ground can be very different, as Guardian Cities readers recently reported.

And yet, cities benefit from accessibility. One World Health Organisation studydescribed how, like Meere, disabled people are less likely to socialise or work without accessible transport. Cities also miss out on economic gains: in the UK the “purple pound” is worth £212bn, and the accessible-tourism market an estimated £12bn.

Some cities, however, are leading the way.

Mapping apps make navigating cities a doddle for most people – but their lack of detail on ramps and ped kerbs mean they don’t always work well for people with a physical disability.

Take the hilly city of Seattle, where several neighbourhoods have no pavements at all, and many streets have a slope grade (or tilt) of 10% or even 20%.

The University of Washington’s Taskar Center for Accessible Technology has a solution: a map-based app allowing pedestrians with limited mobility to plan accessible routes. AccessMap enables users to enter a destination, and receive suggested routes depending on customised settings, such as limiting uphill or downhill inclines. The image above shows Seattle streets coloured by incline: green means flat; red means a slope of 10% or above.

For example, while Google Maps sends pedestrians from University Street station to City Hall via Seneca Street, with its steep 10% grade, AccessMap sends them via Pike Street instead – a slope of less than 2%.

OpenSidewalks is crowdsourcing information such as pavement width and kerb -downs

It also supplements data from Seattle’s Department of Transportation and the US Geological Survey with information from mapathon events. Now the Taskar Centre’s related OpenSidewalks project is taking it further by crowdsourcing extra information, such as pavement width and the location of handrails.

By 2030, one in five Singaporeans will be over 60, with this “silver tsunami” driving awareness of ageing and disability. The city may not historically be known for inclusive practices, but has recently won praise from the UN for its accessible “user-friendly built environment”.

The Universal Design principles drawn up by Singapore’s Building Construction Authority have encouraged accessibility in new developments since its launch in 2007.

CapitaGreen, in the central business district, is a 40-storey office block that has won a host of UD awards. Completed in 2014 at a cost of S$1.3bn (£700m), the Toyo Ito-designed structure features column-free spaces and a low concierge counter to help disabled people move around the building more easily. 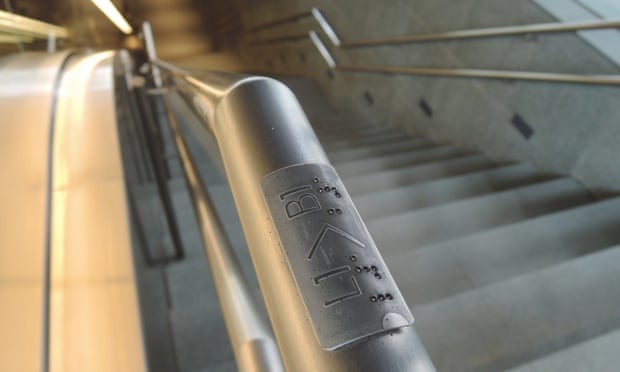 Braille directions on handrails in the award-winning CapitaGreen office block

Singapore’s MRT has also been working to improve accessibility over the past decade. The 30-year-old nework has been getting more lifts, wider gates and tactile guidance, and more than 80% of the 138 stations have at least two barrier-free routes.

The title of world’s most accessible metro system, however, probably goes to Washington, DC. All 91 subway stations are fully accessible, along with its rail carriages and the entire bus fleet.

People with autism can be hypersensitive to sound, light and movement, and become overwhelmed by noisy, cluttered or crowded spaces. Sweetwater Spectrum, a $6.8m supported-housing project in Sonoma, California, aims to address this.

The site, which opened in 2013, includes four 4-bed homes for 16 young adults, a community centre, therapy pools and an urban farm – all designed by Leddy Maytum Stacy Architects according to autism-specific principles recommended by Arizona State University to promote a sense of calm. 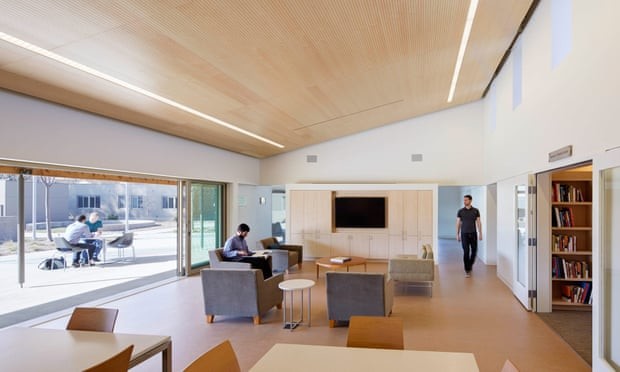 Inside the Sweetwater Spectrum housing project

Along with simple, clear lines, the homes are designed so residents can clearly see spaces across thresholds. Noise is kept to a minimum thanks to quiet heating and ventilation systems and thoughtful design, such as locating the laundry room away from the bedrooms. Fittings and decor reduce sensory stimulation and clutter, with muted colours, neutral tones and recessed or natural light. 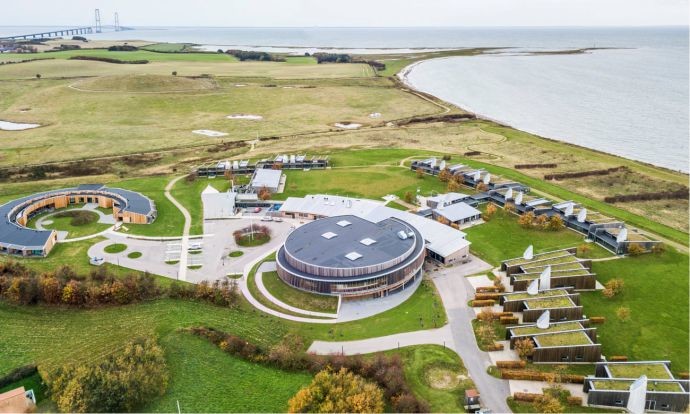 At the centre of the venue, owned by the Danish Muscular Dystrophy Foundation, is a vast, circular sports hall, with an aerial ropeway and climbing wall for wheelchair users and an integrated pulley system. Outside, a 100m ramp spirals up from the base of the hall to a sky lounge. (The ramp can also be used as a wheelchair racing track.)

The 24 hotel rooms each have ceiling hoists, electronic curtains, beds that can be automatically raised or reclined, adjustable height sinks and accessible toilets. By the waterside, a private bathing jetty is wide enough for wheelchairs and accessible via a ramp. 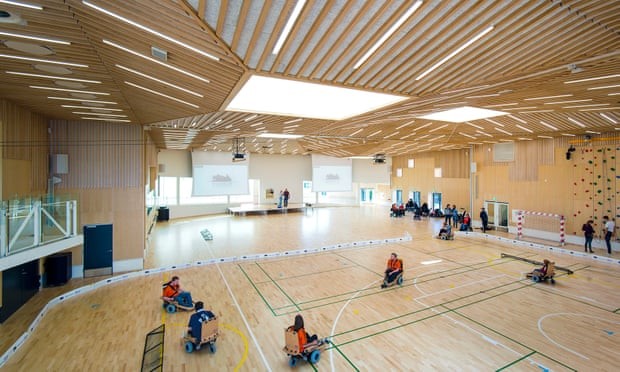 The multi-purpose sports hall in the Musholm complex

“Accessibility must be felt but not seen,” says foundation director Henrik Ib Jørgensen. Musholm, which cost €14.5m (£12.9m) to build, is run as a social enterprise. “Lack of accessibility, other people’s assumptions, body ideals and a lack self confidence among people with disabilities are often the biggest barriers for diversity,” he adds. “We wanted to a place where there is space for differences.”

Denmark is also home to what is widely regarded as the world’s most accessible office building. The House of Disabled People’s Organisations in the Copenhagen suburb of Taastrup is the shared headquarters of some 30 different disability groups. Built in 2012 for 178m krone (£21m), the Universal Design includes drive-through lifts so wheelchair users don’t have to turn around, and small, tactile knobs on railings so blind people can easily tell which floor they are on. 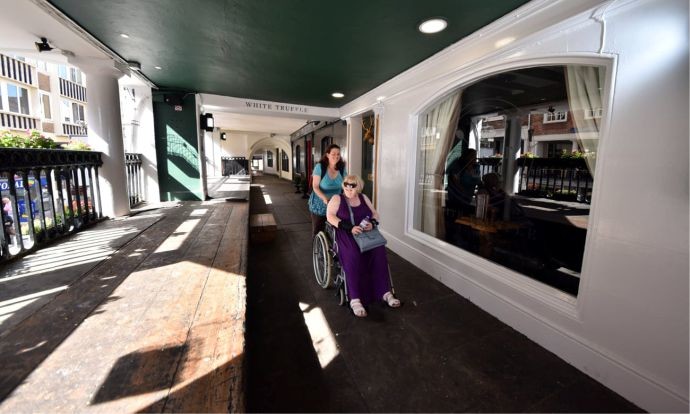 Chester in north-west England is renowned for its two-mile circuit of Roman, Saxon and Medieval walls and its elevated walkways, called Rows. But the city’s historic status belies its role as an accessibility champion: last year it became the first British city to win the European commission’s Access City award.

The Rows are accessible with ramps, a lift and an escalator, while the council’s 15-year regeneration strategy prioritises accessibility in new developments.

Take the £300m Northgate shopping and leisure development, to be completed by 2021. The site will include accessible stores, restaurants, housing and a 157-room hotel including eight accessible rooms with ceiling hoists. The hotel will include a changing places facility for people with complex or multiple and profound disabilities. (Unlike standard accessible toilets, these include a height-adjustable changing bench, adjustable sink, a toilet designed for assisted use and hoist.) Chester already has six such changing places facilities, including one at the recently opened bus interchange, and more are planned around the city.

The accessible design of Chester’s year-old cultural centre, Storyhouse, was d after feedback from disability groups and the council’s access team. The £37m theatre, cinema and library complex has seven accessible toilets, a changing places facility, flexible seating for groups of disabled theatre-goers, audio description and hearing loops. Backstage, there is an accessible toilet, accessible changing rooms and lift. 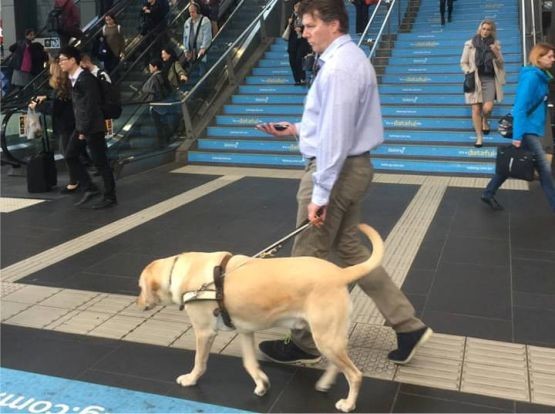 Users receive audio cues via their smartphones, providing directions or real time information about issues such as escalator outages. Outside, the app provides real time directional information; inside, where GPS is unreliable, 20 wireless Bluetooth beacons means users still receive information. Audio cues include advice such as: “Approaching three escalators on left, followed by a set of doors – the doors on the left are automated.”

The trial is led by the charity Guide Dogs Victoria, which plans to install similar systems at Melbourne Zoo, Albert Park (home to the Australian Grand Prix) and the Docklands area.

“In many situations, the person with low vision and blindness will have greater knowledge than the sighted person,” says Alastair Stott of Guide Dogs Victoria. “It’s a complete role reversal.”

What would a truly disabled-accessible city look ?