JAKARTA — A provisional moratorium on issuing forest-clearing permits for plantations and logging is expected to be made permanent, Indonesian officials have announced.

The moratorium prohibits the conversion of primary natural forests and peatlands for oil palm, pulpwood and logging concessions, and was introduced in 2011 by then-president Susilo Bambang Yudhoyono as part of wider efforts to reduce greenhouse gas emissions from deforestation.

It was initially slated to run for two years, but has been extended three times since then, most recently in July 2017 by Yudhoyono’s successor, President Joko Widodo.

Environment and Forestry Minister Siti Nurbaya Bakar told Mongabay that when it comes up for renewal again this July, the policy will be made permanent.

“[The proposal] is in the final stage now, signed by other ministers,” Siti said.

An official in her ministry added that the proposal was now awaiting the president’s approval. Abetnego Tarigan, an environmental adviser in the office of the president’s chief of staff, confirmed that the ministry had proposed making the moratorium permanent.

The move dovetails with the current administration’s development model of reining in agricultural and forestry expansion and boosting productivity from existing concessions.

In addition, the government also wants to shift away from a heavy reliance on exports of raw commodities, to developing downstream industries that process those commodities to add value, he said.

“We know that if we only rely on producing raw materials, there won’t be any significant benefit,” Abetnego said.

Ultimately, having a permanent licensing ban in place will provide better protection for the environment while also maintaining economic growth, he added. Indonesia is home to the third-largest expanse of tropical rainforest left on Earth, after Brazil and the Democratic Republic of Congo. However, huge swaths of those forests have been cleared on the islands of Sumatra and Borneo to make way for industrial-scale extractive industries — primarily oil palm and pulpwood plantations, but also logging concessions and coal mines.

When the ban was introduced, it elicited a backlash from these industries, with the palm oil lobby warning of economic disruptions. That hasn’t been the case, Abetnego said.

“We’ve seen that the current moratorium, with all of its criticisms, has contributed to reducing deforestation, which means it shows a positive trend,” he said. “And the fact is that our economy didn’t collapse. Before, people thought the moratorium would make the economy [decline], but that didn’t happen.”

Forest in West Papua, Indonesia. Image by Rhett A. Butler/Mongabay.

Activists and environmentalists have welcomed the plan to make the moratorium permanent as a key step toward reducing deforestation and helping Indonesia meet its emissions reductions goals. The country has pledged to slash carbon dioxide emissions by at least 29 percent over the business-as-usual projection by 2030. Indonesia is currently one of the top emitters in the world, but unlike industrialized nations, the bulk of its emissions come from deforestation rather than burning of fossil fuels.

Imposing a permanent forest-clearing moratorium would at the very least cement the protection of the 660,000 square kilometers (255,000 square miles) of primary and peat forests covered at present, according to Arief Wijaya, a senior manager for climate and forests at the World Resources Institute (WRI) Indonesia.

“That means the government can focus on how to strengthen the ongoing moratorium … and peat protection policies,” he told Mongabay.

Enforcement of the moratorium remained lax for the first five years after it came into force. Data on tree cover loss from the Global Land Analysis & Discovery (GLAD) lab at the University of Maryland (UMD) reflect a high rate of deforestation during this period, ranging from 9,280 square kilometers (3,580 square miles) in 2012, to 7,350 square kilometers (2,840 square miles) in 2015 — including within areas ostensibly covered by the moratorium.

Those figures declined significantly from 2016 onward. The catalyst for that change wasn’t stronger enforcement of the moratorium, however, but new government regulations adopted in response to a particularly disastrous season of forest fires in 2015 that destroyed extensive swaths of peatlands. In 2018, Indonesia lost a relatively small amount of forest cover, at 3,400 square kilometers (1,310 square miles), according to UMD data — the lowest rate since 2003, and a 40 percent lower than the annual average from 2002 to 2016.

Mikaela Weisse, the Global Forest Watch manager at the WRI, attributed this to the peat protection policies implemented after the 2015 fires. While the 2011 moratorium banned new permits for concessions on peatlands, it still allowed companies with existing permits to continue clearing their land. It wasn’t until 2016 that a nationwide ban on clearing carbon-rich deep peatlands was introduced.

“We’ve seen even larger s [in deforestation] on peatlands and areas covered by Indonesia’s forest moratorium,” Weisse said. “It seems that Indonesia’s forest policies at the aftermath of the fire season a few years ago are having an effect.”

Arief concurred that the licensing moratorium was initially ineffective in protecting primary and peat forests because it wasn’t coupled with strong enforcement. The 2015 fires, he said, had gone some way toward addressing that shortcoming by spurring government action.

“It shows that the government has truly been enforcing its policies since 2015, which then showed the impact of the forest moratorium,” he said. “The policies themselves are good, but the devil is in the implementation.” 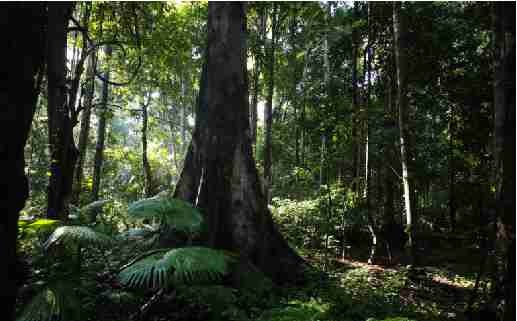 Lowland rainforest in Indonesia. The forests of Indonesia, Malaysia, and Papua New Guinea store vast amounts of carbon but are being destroyed and degraded by demand for timber, wood pulp, and palm oil. Image by Rhett A. Butler/Mongabay.

Environmentalists like Arief still see room to improve the moratorium once it becomes permanent. In particular, Arief says he wants to see secondary forests, defined as those that were previously logged, included in the licensing ban.

Secondary forests span 433,000 square kilometers (167,000 square miles) across Indonesia, according to the government. More than half of this area is designated as production forest, which means it can be converted for logging and pulpwood concessions. Nearly a tenth is earmarked for non-forestry conversion that includes oil palm plantations.

Protecting these areas from conversion would go a long way to determining Indonesia’s success in meeting its stated emissions reduction goals. The government’s own scenario puts a cap on its total emissions in 2030 of 2 gigatons of CO2. But the country is on track to emit 2.3 gigatons by then, even with the full implementation of existing policies to cut emissions, according to a 2017 WRI analysis.

If secondary forests and forested areas already licensed out to developers are protected under the moratorium, however, Indonesia could easily fall under 2-gigaton cap in 2030. That makes the moratorium, if expanded more comprehensively than at present, the single policy with the largest climate change mitigation potential in Indonesia’s toolkit, Arief said.

“Therefore, I recommend secondary forests be included in the moratorium,” he said. “Not all secondary forests are heavily degraded. Many of them are still in good condition, with high carbon stock, lots of biodiversity and good environmental service.”

Anggalia Putri, a researcher at the environmental NGO Madani, agreed that the inclusion of secondary forests in the moratorium was the key to Indonesia meeting its emissions target. She said this was the category of forest with the lowest degree of legal protection in Indonesia.

“So these are the forest areas that most urgently need to be saved through this moratorium, because other forest areas are at least covered by protected or conservation status,” she told Mongabay.

Abetnego, the government adviser, said there weren’t any plans to protect secondary forests under the moratorium. He said the government’s priority for these forests was to parcel them out to local and indigenous communities under an ongoing social forestry program.

Secondary forests and other previously degraded lands, he said, “still have potential to be managed by local people in the form of social forestry. So let’s not lock away that potential and possibility for the people to utilize” secondary forests by including them in the moratorium.

Anggalia said the government could still achieve its social forestry goals while extending the moratorium to secondary forests, by prohibiting companies from obtaining licenses for these forests.

“What we need to do is protect secondary forests from large-scale permits and allow local communities to still have access to them,” she said.

Tropical forest areas that have been deforested through a process of slash and burn to open areas for agriculture and subsistence farming in the Kalimantan region of Borneo, Indonesia.

It’s not only secondary forest that remains vulnerable. The current moratorium allows exemptions for conversion of primary and peat forests under certain conditions. These include concessions for geothermal and oil exploitation, and agricultural activity deemed to be of strategic national importance. The latter initially covered the cultivation of rice and sugarcane, but now also includes corn, sago and soybeans.

A major government initiative there is the Merauke Integrated Food and Energy Estate (MIFEE), earmarked for rice and sugarcane plantations to shore up national food security. The problem is that developers operating in the area are going beyond that scope, according to Madani’s Anggalia.

She said some permits had been issued for sugarcane plantations in the MIFEE, but the developers had planted oil palms instead — a crop that doesn’t qualify for an exemption to the licensing moratorium. Anggalia said cases like these showed that the exemption could be easily abused, especially in remote regions like Papua, whose remoteness and poor infrastructure make it difficult for civil society and government to monitor forestry activity.

She said there were no safeguards in place to ensure that cultivation of strategic crops didn’t lead to environmental degradation and social conflicts. Ideally, she said, these safeguards would include giving local and indigenous communities the rights to manage the concessions, instead of big companies, and ensuring these communities have a chance to give their free, prior and informed consent if companies seek to open up new concessions in their areas.

“But since there are no safeguards or requirements that agricultural activities aimed to support the national food sovereignty are managed by the people, what’s happening is new permits issued for industrial-scale concessions, like the MIFEE project, could lead to conflicts,” Anggalia said.

Experiences from Sumatran and Borneo suggest that once Papua’s primary forests are cleared, further deforestation is inevitable, Anggalia said.

“Numerous studies done by WRI clearly show the steps of deforestation in Indonesia, starting with ive logging,” she said. “Big trees are cut first to get huge profits, such as merbau trees. Once there’s no more big trees, the land is degraded and thus it’s easier to justify future deforestation there.”

She said the government couldn’t use food security to justify issuing new permits for the conversion of primary and peat forests, adding that there was plenty of idle land available for agriculture.

“Why does [the government] still target primary forests for agriculture?” Anggalia said. “It means there are short-term interests to extract timber. But that’s not necessary if we see how much abandoned land is available.”

“The government should maximize the utilization of non-forested lands or use abandoned concessions to secure food sovereignty, and thus minimize forest degradation,” she said.

Arief said the problem was that businesses were reluctant to cultivate such land because of their fragmented spread and the likelihood that they’re already subject to conflicting claims by local communities. But this is a problem that could be cleared up if the government was more transparent about disclosing its land-bank data, Anggalia said.

If the data was publicly available, civil-society groups could work with the government to come up with a unified and trustworthy map for land use, Anggalia added.

“It’s not that there’s no land, but that these lands are controlled by just a small number of people,” she said. “No one should go hungry, because there’s a lot of food being wasted and a lot of unethical use of space.”