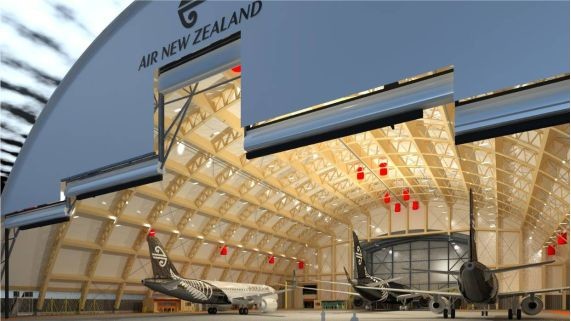 Construction on the hangar will begin later this year and is expected to take two years.

Air New Zealand will build a new 10,000 square metre hangar at its engineering base in Auckland.

The airline said it would be the largest single span timber arch aircraft hangar in the world.

The new Hangar 4 will be one and a half times the size of the airline's largest existing hangar.

It will be built at the airline's Auckland engineering base at Geoffrey Roberts Road in Mangere.

Air New Zealand did not say how much it would cost.

The hangar will be a 5-6 "green star" building certified by the New Zealand Green Building Council.

Green Star is an internationally-recognised rating system for the design, construction and operation of buildings.

The roof will be double layer insulated allowing the hangar to retain heat without the need for heating.

Large ceiling fans will keep the hangar cool in summer.

"It was really important to us the team that will work in this space day-to-day be involved in the design process," Hurihanganui said.

Air New Zealand's fleet had outgrown its existing hangars which were built in the 1960s and 1980s, she said.

Construction was expected to take two years and would begin towards the end of 2019.