Harold’s Furniture closing after 73 years of history in Lebanon

After 73 years, Harold's Furniture of Lebanon is closing its doors at an unspecified date. (Photo: Andrew Kulp)

Lebanon’s oldest and largest furniture store is going out of business.

After 73 years, Harold’s Furniture at 2500 Cumberland St. is closing its doors for good. A final date has not been set, but all merchandise on the floor must go and is on sale for 50 to 80 percent off original prices.

Stuart Perlmutter, president of Harold’s Furniture, says the property has been sold to a car dealership.

Why Harold’s Furniture is closing

In the span of one hour on a Thursday afternoon, Perlmutter helped carry and load a table in a couple’s vehicle, consoled a friendly woman who heard the store was closing and struck up a conversation with a fellow Army veteran.

It should come as no surprise Harold’s was named retailer of the year for 2013 by the Tri-State Home Furnishings Association, and was recognized as one of the top stores in the country as recently as 2018 by “Furniture Today.”

So it was also difficult to get a sense of why Harold’s is closing. Even Perlmutter didn’t share a clear answer, falling back on, “It’s time.”

With the store closing, Perlmutter expects to have more time for various hobbies, such as collecting and selling model trains.

Photos of the original downtown Lebanon locations for Harold's Furniture, which will close its doors after 73 years in business. (Photo: Andrew Kulp)

“He looks at my dad and goes, ‘Young man, you’re not getting this store,’” said Stuart Perlmutter. “So my father found the guy and showed him a commendation letter he got from his commanding officer in France on what a good job he did. The guy read it and said, ‘You’ve got the store.’”

Harold’s eventually purchased the building where an Aaron’s rent-to-own retailer stands today and remained there until 1979. Then it moved across the street to 618 Cumberland St., now home to Pennsylvania Counseling Services, but a space the store inhabited for 25 years.

By the time Harold’s moved to its final location outside the city, it was the longest-serving store downtown. 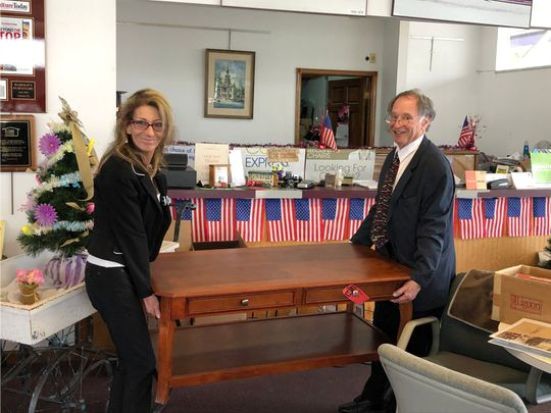 A Lebanon High School graduate, Stuart Perlmutter got out of the Army in 1973 and worked as a reporter for a short time in the Philadelphia suburbs, where he met his wife, Louise. They returned to the area in ’75 and, having grown up in the business, he went to work at Harold’s full time.

“Every day, four or five people come in just to wish me well,” said Perlmutter. “It’s really heartening. And they called about my dad and they talk about all the furniture they bought from us.”

“I just say thank you to all the customers. My father would say the same thing.”

Thank you so much for your years of customer appreciation.

Stu just loves telling me about the customers coming into the store to say ‘thank you.’ You have meant the most to his time in Lebanon. Remember he is born in Lebanon and a dedicated lover of this town.

We wish all of you luck and happy times.